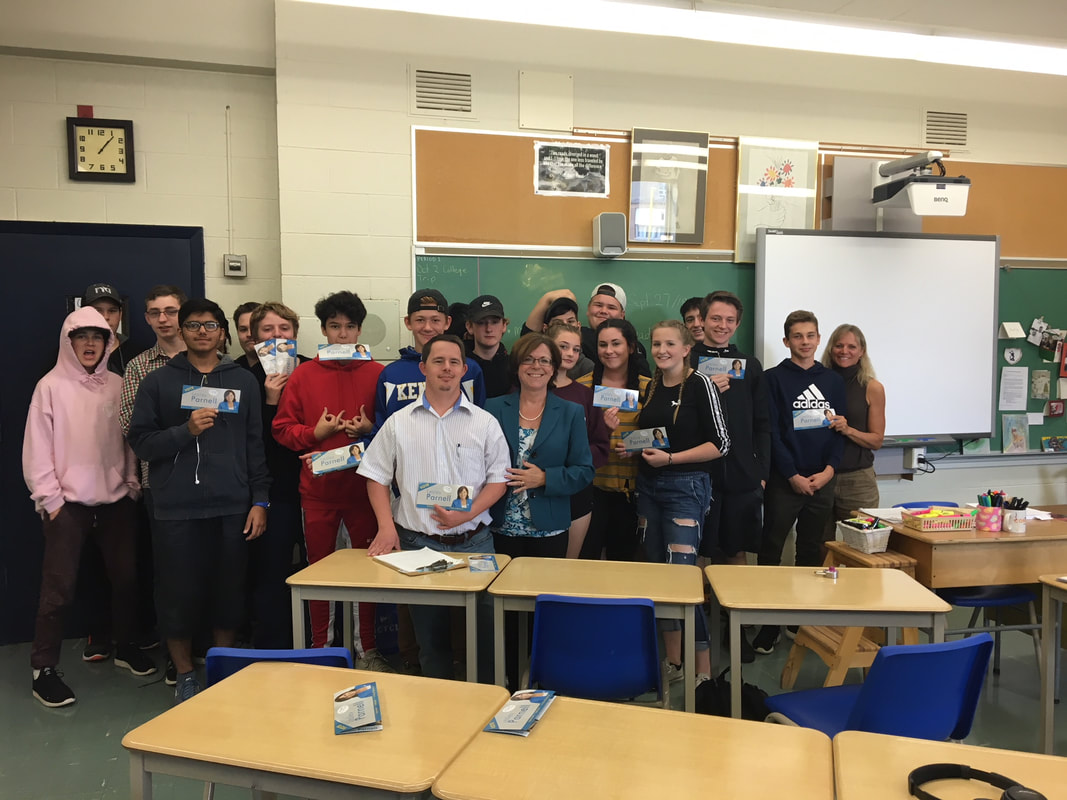 Ms. Peter's Civics class at Kenner invited Councillor Parnell into their classroom to talk about all things municipal. What does a councillor do anyway?
For at least 10 years of my family's life I was dedicated, with my family, to Grove School and then Roger Neilson Public School. It was imperative that we saved a public school on the site in our south end. Otonabee Ward. We did, and we saved a very important tree as well! Coronation Tree from Windsor Castle. Old tree, new accessible school, very cool! Learn More Here.
The 10th annual Great Neighbourhood Tour with Fleming College Housing & Student Leaders, Peterborough Police & Auxiliaries, plus Councillor Parnell. Learn More Here.
EDITORIAL
​Peterborough editorial: Parnell showed leadership by ending transit garage standoff  The city will go ahead with the project on the canoe museum site.
By Examiner staff
Wed., July 27, 2022The leader who stepped forward at city council Monday night to guarantee a $38-million decision on a new transit garage would be made turned out to be Coun. Lesley Parnell.
Congratulations to Parnell, and thanks from city taxpayers, for switching her vote and ending a standoff on the choice of a site.
A week ago, council was presented with two acceptable sites for relocation of Townsend Street bus repair and maintenance facility.
A five-year search process ranked the current Canadian Canoe Museum site on Monaghan Road No. 1 and city-owned property on Ashburnham Drive south of Highway 115 as a close second.
Council rejected both, despite a warning that $38 million in available federal/provincial funding for the $53.2 million project could disappear if it did not go forward during the current grant cycle.
Last week, Parnell voted for the Ashburnham Drive site. On Monday she switched to Monaghan Road, the swing vote in a 6-5 decision.
It was the responsible thing to do. While neither site was judged by consultants to be perfect, either would be fine. Given that more than 130 sites were considered, the notion that a better solution was out there and a decision should be delayed until after the October election was nonsense.
As Parnell noted, getting federal/provincial cash to help pay for cleanup of the Monaghan Road property is a substantial win. Cleanup of residue from when the property was an Outboard Marine manufacturing plant will expensive but is doable. The consultants built in $5 million for soil remediation and environmental work, plus a $5-million buffer if costs run higher.
The major advantages for Monaghan Road are that is big enough to satisfy current needs and future expansion, and has the lowest overall cost.
A downside is its location at one end of a residential section of Romaine Street. Homeowners along Romaine don’t want added bus traffic in the neighbourhood.
That’s easily taken care of.
The city will save $200,000 annually by having buses travel to the more central Monaghan Road site rather than Ashburnham Drive.
The plan should require all buses to get there using Lansdowne Street and Monaghan Road — never coming west on Romaine from George or Park streets. The relatively small number of buses that will need a slight rerouting represents an acceptable extra cost.
While Parnell gets points for making a responsible switch, Coun. Steven Wright’s decision to vote against both options and fight to delay the project raises questions about his judgment.
Wright is convinced, without any evidence, that a better site can be found and that the $38 million in grant money now guaranteed would be available again in the future.
Wright is running for mayor in October and has said he would lead council more co-operatively. His puzzling stance on the garage site undercuts that promise.
The budgeted Monaghan Road purchase price is $1.1 million, which will need to be settled with the Canoe Museum. Given the cost of environmental work — and that the city just went out of its way to sell the museum a site for its new home without going to market — that looks fair.
It was touch and go, but there will be no repeat of the lost $37 million twin-pad arena grant. Buses can stay off Romaine Street. A five-year, $300,000 search process has not been wasted.
That’s a good night’s work, thanks to Parnell, but it shouldn’t have had to come down to one councillor making the right call
---------------------------------------------------------------

​https://www.thepeterboroughexaminer.com/news/peterborough-region/2022/08/10/acting-peterborough-police-chiefs-stand-with-tim-campaign-taking-preventive-approach-this-year.html
​​
Have a group who would like a personal Question and Answer session with your current City Councillor? Please invite me.